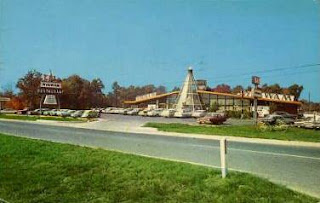 It is sad to announce that the Wigwam has finally met its end. The Wigwam was demolished this week due to poor maintenance and the county had to tell the owners either maintain the appearance of the vacant building or demo it.
This building was a long standing icon in the Waldorf area and has hosted a number of tenants in its time. In the 50's it was a restaurant and then the 60's and early 70's a lounge and showplace for bands which would play inside the glass wigwam section of the building. It's had one armed bandits when Waldorf was known as "little vegas" and hosted a number of great entertainers. In later years it served as the home of the Walls family bakery which was famous for it's great eclairs. You can still find them at their new location over at 2260 old washington rd., we had them for our grand opening here and people still talk about it.
There are no current plans after demolition. When we receive updates we will post them. The land is currently owned by Regency furniture.
Posted by Chris Shasho at 2:21 PM No comments:

Time to make the donuts

Dunkin' Donuts has returned to the Pinefield area and remodeled the old Wendy's location in front of the Pinefield North shopping center. Their grand opening was this Monday.
Posted by Chris Shasho at 2:10 PM No comments: